Supermap GIS is a GIS service provider, with a long time in the market with a history from its beginnings in a wide range of solutions in the geospatial context. It was established in the 1997 year, by a group of experts and researchers with the support of the Chinese Academy of Sciences, its base of operations is located in Beijing -China, and it can be said that its growth has been progressive in Asia, but since 2015 has had an interesting stage of expansion thanks to its innovation in multi-platform GIS technology, GIS in the cloud, next-generation GIS 3D, and GIS client.

At his stand at the FIG week in Hanoi, we had time to discuss various things that this software does, unknown to much of the Western context. After several interactions, I decided to write an article about what most impressed me about Supermap GIS.

SuperMap GIS, is composed of a series of key technologies -platforms- which includes geospatial data management and processing tools. From 2017, users have been able to enjoy its update, Supermap GIS 8C, however, this 2019 was released to the public SuperMap 9D, which is composed of four technology systems: GIS in the cloud, integrated multiplatform GIS, 3D GIS and BigData CHALK.

To better understand why it is considered an integral solution, you must know how your products are composed, that is, what each of them offers.

The multiplatform GIS is constituted by: the iDesktop, the GIS Component, and GIS Mobile. The first of the aforementioned iDesktop, is developed based on plug-ins -accessories-, it is compatible with various CPUs, such as ARM, IBM Power or x86, and works efficiently in any operating environment that has been installed, whether Windows, Linux and integrates 2D and 3D functionalities.

Any type of user, individual, business or government can use this desktop application, since it is very easy to use and is designed in the style of Microsoft Office applications. In this application, you will find all the tools that can be commonly seen in any desktop GIS for loading and displaying data, building entities, or analysis processes, to which access to web map services is added, promoting collaboration among users. Within its operational characteristics include: management and visualization of photogrammetric images, BIM, and point clouds.

In the case of GISMobile, you can work in iOS or Android environments, and can be used offline for both 2D and 3D data. The applications that Supermap Mobile offers (SuperMap Flex Mobile and Supermap iMobile), include field surveys, precise agriculture, intelligent transport or inspection of facilities, some of these can be customized by the user.

GIS in the cloud

One of the inevitable and irreversible trends for the management of geospatial data. It is a platform connected to multiple GIS terminals so that the user / client can build products in an efficient and stable manner. It is made up of the SuperMap iServer, SuperMap iManager and SuperMap iPortal, which are detailed below.

SuperMap products have integrated data management 2D and 3D, with its functionalities and tools is possible: BIM modeling, management of oblique photogrammetric data, modeling of data from laser scanners (point clouds), use of vector elements or 2D raster to which height and texture data are added to create 3D objects.

SuperMap, has made efforts for the standardization of 3D data, with this is possible in the unification and addition of technologies such as: virtual reality (VR), WebGL, augmented reality (AR), and 3D printing. Supports vector data (point, polygon, line), as well as text entities (CAD annotations), directly reads REVIT and Bentley data, digital elevation models, and GRID data; with which you can generate construction data of textured meshes, operations with voxel rasters, supports for dimensionality calculations or addition of effects on objects.

Some of the applications in the 3D SuperMap environment are:

Through SuperMap technologies, visualization, storage, data processing, spatial analysis and real-time data transmission can be performed, this being an innovation in the field of GIS + Big Data. It provides the SuperMap iObjects for Spark, a GIS component development platform, which provides the user with the GIS capabilities needed to handle Big Data. On the other hand, it can be mentioned that it provides high-performance dynamic representation technology through support for modifications of map styles, updates and representations in real time, open source libraries and spatial big data visualization technologies are also offered (scatter diagrams, thermograms, grid maps, or trajectory maps.

The functionalities mentioned above are used to improve the understanding of the environment, which translates into the development and decision making on topics such as: Smart City, Public Services, Urban Management and Natural Resources. The case studies were visualized, where they used the use of SuperMap and its technologies, among which can be mentioned: The urban management system of the Chogwen District - Beijing, The geographical spatial framework of the digital city based on the cloud , Geoportal of disasters of Japan, Information system for large-scale railway installations in Japan based on SuperMap and Platform for predicting droughts.

SuperMap implemented an Internet and Intranet service, plus a data management model with SuperMap Objects, with which spatial information queries, statistical update, spatial update (label and entity placement), map copy, analysis of buffers, design and printing; all this through a specific information viewer - built in SuperMap -, only for the data generated by this company, which met the expectations of the JR East Japan group that manages the rail system. 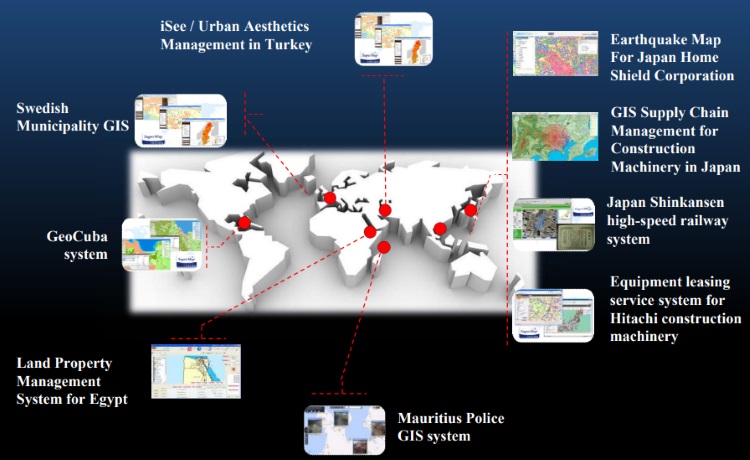 It is interesting of this solution, the ease of its use, a complete and varied product line, the integration of its products, the stable execution of its functionalities and well taken advantage of it can be a good alternative for companies focused on results. The products they offer are not only destined for geographers or geomatics, but they have also been taken to governmental and business instances, who, through the use of it, can make decisions adjusted to the spatial realities.